Living on the North Shore, we’re lucky to have architectural masterpieces sprinkled throughout our neighbourhoods. From Bob Lewis, Fred Hollingsworth, Arthur Ericson, Ron Thom, Ned Pratt, Peter Kafka, Henry Yorke Mann, and Barry Griblin to name a few, Vancouver is home to prolific architects. Today I’d like to share some of these fantastics architects with you and explore their work.

Best known for his post and beam Mid Century Modern style, Bob Lewis has done tremendous architectural work which can be seen around the North Shore. Here is one example of a Lewis classic in Lynn Valley, the incredible ceiling work speaks for itself and flows throughout the home. 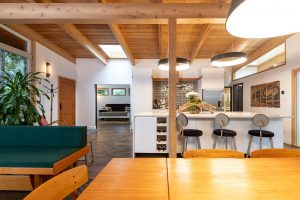 If you’d like to see a more ‘modernized’ Lewis structure, you have to hear the story of Negar Ghorashi’s Lewis reinvention. In 2018 designer Negar Ghorashi spotted a 1959 Lewis post-and-beam in the Whytecliff neighbourhood of West Vancouver. It had been in a relatively untouched state for more than 40 years and while it needed a significant amount of work, she was able to bring this home back to life while keeping the incredible ceiling and work around it intact. 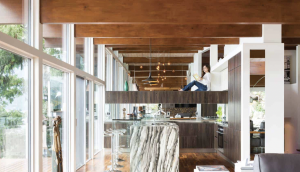 Next I’d like to explore Fred Hollingsworth, one of the very small group of architects who are credited with what has come to be known as West Coast Modernism. As NUVO explains, “Hollingsworth designed his first home in 1946 in North Vancouver—the home in which he still resides today with his wife, Phyllis. It is the design of that home that launched his long and prolific career in architecture. That career has resulted in a significant body of work, much of it award-winning private residences, mainly on Canada’s west coast. Hollingsworth is perhaps best known as the designer of the building that houses the University of British Columbia’s Faculty of Law, a work he completed in 1971. The all-concrete building, with its artistic use of exposed aggregate, blends the interior space into an exterior central courtyard garden. Working seamlessly with nature, both outside a building and inside is a principle of organic architecture and one closely adhered to by Hollingsworth throughout his long career.”

Hollingsworth also designed a number of affordable fir and cedar bungalows that he dubbed “neoteric” houses, based on a post-and-beam design. Recently, a beautiful restored Hollingsworth home actually came to market –  The House of Tomorrow II – which is all about the indoor-outdoor connection that ushered in a new era of west coast design.

Here’s a look at the home now, click here to view all of the fabulous photos! 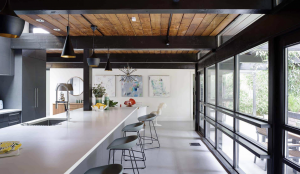 If you’ve liked what you’ve seen so far, you will definitely fall in love with the amazing work of this next architect. 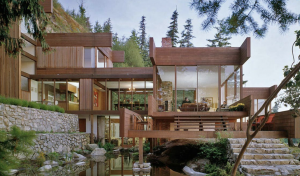 Other than his absolutely stunning work on homes across the North Shore, here are some of Arthur Ericksons famous structures:

Being an SFU graduate myself, I actually never knew who the architect was and it always crossed my mind to look into it. If you haven’t visited the campus before, although a little gloomy, the architectural layout is quite intricate and vast.

Which of the architects mentioned here are you most fond of? Are there any specific pieces of their work that speak to you? Comment below, I’d love to hear it!

2021 Jenny + Suzanne Real Estate Advisors, All Rights Reserved. Contents of this website, including the photography & videos, may not be used without written consent from Jenny Gill PREC* and Suzanne Callaghan PREC*. Maximum effort is put towards the details but cannot guarantee, buyer to verify all details.