What to do around town this Fall 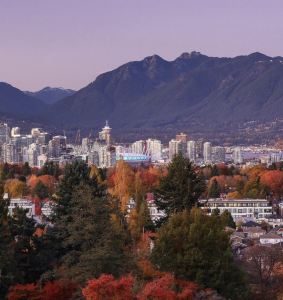 For those of you who are unfamiliar, the 2022 Vancouver International Film Festival is about to begin! From September 29th to October 9th, VIFF will showcase 135 feature films and 102 shorts from 75 countries around the world. The festival includes dozens of world premieres, insightful talkbacks, and more. Click here to purchase your tickets!

Next up we have the Chilliwack Corn Maze, a popular creation by Greendale Acres in partnership with Science World. This is a massive 12-acre experience featuring a gigantic T-Rex alongside a colossal chicken – how can you not be intrigued already! Visitors must complete 12 T-Rex-themed questions curated by Science World in order to escape. Maze-goers can tackle the family-friendly short maze, which takes around 20 minutes or opt for the more challenging maze which takes 40 minutes to finish. To pre-book now, click here.

Feeling a like exploring an activity that involves a bit less walking? Take a seat and enjoy a Canucks game this fall! The Canucks begin the new NHL season at Rogers Arena this season, with home games including Pittsburgh Penguins on October 28, LA Kings on November 18, and Montreal Canadians on December 5.

I also highly recommend taking a look into tickets for Michael Bublé – he’ll be bringing his new Higher Tour to Rogers Arena on October 1st. While it’s likely that Bublé, who has sold over 75 million records worldwide, plays songs from the newly released studio album Higher, I’m sure some of his classics will also be included in the concert!

Now, it’s time for more festive events around town. I will definitely be checking out Capilano Suspension Bridge Park which will be decorated with pumpkins and spooky displays for its annual Halloween event, Canyon Frights. The festivities begin October 14th and you can purchase online now!

While we’re on the topic of spooky events, it’s time to discuss my all-time favourite October outing: Fright Nights. The highly anticipated attraction will be returning to Playland on select nights starting on October 7 and running right through to Halloween night. For those of you who don’t love waiting in long lineups, the fast pass is an absolute game changer, I would highly recommend purchasing them alongside your tickets! This year at Fright Nights, visitors can experience the immersive Halloween-themed experience with seven haunted houses, 19 heart-pounding rides, spooky décor, roaming monsters and thrilling live performances, and more.

I hope these activities are getting you in the mood for the new season! Wishing you all a wonderful fall weekend ahead.

2022 Jenny + Suzanne Real Estate Advisors, All Rights Reserved. Contents of this website, including the photography & videos, may not be used without written consent from Jenny Gill PREC* and Suzanne Callaghan PREC* . Maximum effort is put towards the details but cannot guarantee, buyer to verify all details.